Instantbird 1.5 has been released: go grab your copy now! There are a ton of new features and bugs fixed for this new release, but we’d like to highlight a couple of new features below. 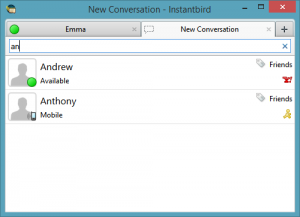 An exciting new feature you’ll find in Instantbird 1.5 is the New Conversation tab. It displays a list of your contacts, ordered based on how frequently and recently you’ve talked to them. Starting a conversation has never been easier! No longer will you have to open a separate window and scroll through your contact list to find a person. Just click the “+” button or press Ctrl/Cmd+T, start typing the name of the contact, and you should see your contact appear at the top of the list after typing only a few letters! You can then press enter and your conversation opens! The first time you open the tab, Instantbird will load your chat logs and learn who you talk to most often in order to offer accurate suggestions. New friends might not show up at the top immediately, but keep talking to them and they’ll reorder themselves. Don’t worry though, this ranking data is kept only on your own computer and is not transmitted or shared in any way!

Additionally, if you use Instantbird for IRC, the New Conversation tab will automatically query your servers to download the list of channels that are available to you. (This is generally known as LIST in IRC jargon.) Just like with your contacts, you can type in the name of a channel and it’ll bubble to the top of the list. Sometimes you don’t always know the channel name (that’s why you’re searching, right?): we’ve got you covered there too! Instantbird will search the channel topics in addition to channel names so you can quickly find new channels to join!

A very visible user interface improvement that was included for Instantbird 1.5 is redone tooltips that fit more into the visual style of the rest of the user interface. They should be immediately familiar to Instantbird users as they’re modeled after the conversation header! Hopefully this will help you find information quickly and easily whether conversing with your contacts or just checking their status.

For Linux users out there, we are still only offering 32-bit builds, although we hope to change that soon! If you are running a 64-bit Linux distribution, previously you’d have to install the ia32-libs (see our FAQ), but this has changed in recent versions of Ubuntu which no longer offer this package. The procedure now is to run:

If you’d like to see a complete list of what’s new in Instantbird 1.5, please view the release notes. 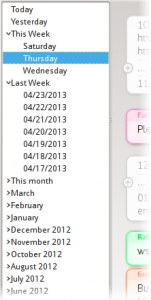 Get your copy of Instantbird 1.4, hot off the presses! We’ve made a lot of improvements (for full details, see the release notes):

As we stated during the Instantbird 1.3 release, this version now requires Mac OS X 10.6 (Snow Leopard). Instantbird 1.4 is based off Mozilla 20 and libpurple 2.10.7, the newest versions available.

We’ve released Instantbird 1.3 (get your copy here)!  This update includes some nice improvements, which are fully outlined in the release notes.  A few changes of note are: 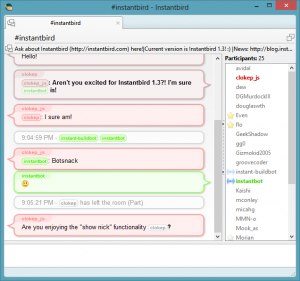 Unfortunately, this will be the last release to support Mac OS 10.5 and PPC, as we will be unable to support these once we upgrade Instantbird to Mozilla 17.

We’ve got plenty of interesting new features and ideas for upcoming versions of Instantbird!  We will update to a more recent version of Mozilla with awesome new features, imagine all the cool things we can do with technologies like WebRTC!

We’re very proud to release Instantbird 1.2, which has a huge number of improvements!  If you love Instantbird 1.1, you’ll definitely appreciate the improvements made in this release; and if you don’t use Instantbird yet…well I’d suggest you give it a try! You can read the full list of changes (403 to be precise) in the release notes.

Instantbird 1.2 took way more time to finish (10 months!) than we originally expected, and even though there’s a very long list of improved details, there’s no major new features. So you may wonder… what happened?!?

Well, the reason why it took so long is… Thunderbird! The major change that came with Instantbird 1.2 is that the chat back-end code is now shared with Thunderbird, that will feature instant messaging support in its version 15, to be released in a few weeks.

This forced us to give priority to some long standing side projects that were interesting for Instantbird, but not immediately required: as Thunderbird can’t use libpurple which has an incompatible license, we had to finish sooner, rather than later, some major architectural changes to ensure that our chat back-end doesn’t depend on libpurple at all. That’s right, Instantbird 1.2 is no longer based on libpurple (but still uses it to support many protocols of course).

Our back-end working without libpurple wasn’t enough for Thunderbird: the only protocol plug-in shipped in Instantbird 1.0 and 1.1 that didn’t use libpurple was Twitter; more were obviously needed. Fortunately, we were already cooking a JavaScript implementation of XMPP (started during Google Summer of Code 2011) and IRC (it’s been Patrick’s side project for years!). Our initial goal when we started working on these 2 protocol reimplementations in JavaScript was to gain full control of the way these important protocols are handled by Instantbird, and to improve their extensibility. For Thunderbird, finishing them became a priority, and it’s where we spent most of our time!

As I’m talking a lot about Thunderbird, you may be wondering if this involvement of the Instantbird team in the Thunderbird project could mean we are discontinuing the development of Instantbird as a stand-alone application. Not at all! We believe both applications complement each other very well, and have different use cases. While Thunderbird, with integrated email and IM, may be better for users who work all day long with their email client and IM the same contacts; we believe lots of home users tend to use a webmail instead of a local email client and would prefer to keep their IM application separate.

We’re very excited that Instantbird is developing closer ties with Mozilla, who we think shares a similar mission of allowing users, YOU, to control their own privacy on the Internet! A few of our developers are now “peers” of Mozilla’s new chat module, and we are pursuing more opportunities to bring Instantbird closer to Mozilla in the future.

We hope you’ll enjoy using Instantbird 1.2 as much as we are and we greatly look forward to the next version of Instantbird! As always, if you see any bugs please file a bug, catch us on IRC or email us!

Exactly 4 years after the very early 0.1 preview, Instantbird 1.1 has just been released today in 13 locales (Swedish and Estonian are new)!

In addition to several stability fixes and a dramatic reduction of resource consumption in some cases, this new release will make Twitter and IRC much more usable in Instantbird:

All these changes have been commonly requested, so no surprise here. But there’s one last feature I would like to talk about before offering you a download link: Instantbird 1.1 brings support for putting conversation on hold. This means you can now close conversation tabs without leaving the conversation, the conversation will sit at the top of the Contacts window until you reopen it or someone talks to you. While this may seem like a small change, it’s exceptionally useful for IRC users who tend to idle in lots of channels because they want to “be there just in case” but don’t interact much with the conversation.

The Instantbird team is pleased to announce a polished Instantbird 1.0, released today in 11 locales.

Instantbird is an extremely easy to use and highly extensible instant messaging client that aims to respect its users!

Building on the experience available via open-source software, Instantbird is able to harness the power of Pidgin (via its libpurple protocol library) and of Mozilla’s Firefox technology, to provide access to a wide variety of instant messaging networks, while providing an easy (and well known) extension platform. Although Instantbird is fully cross-platform (Windows, Mac OS X, Linux), we strive to present a native look-and-feel to the user interface. 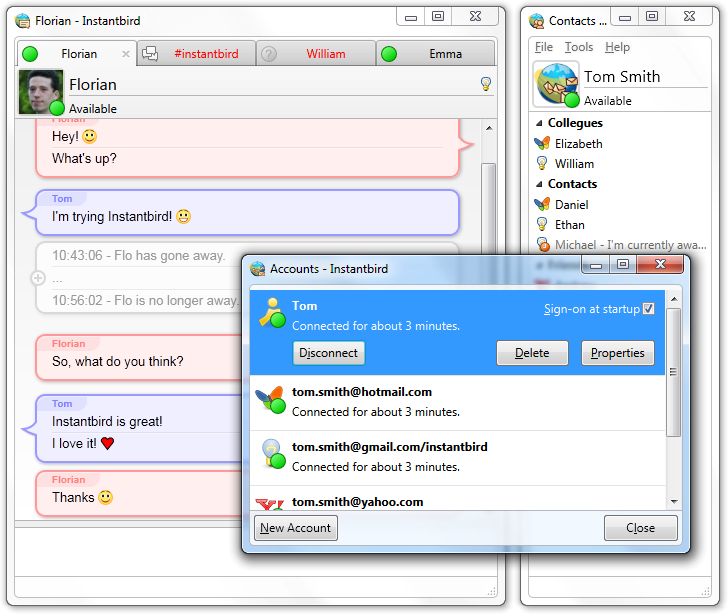 First and foremost, Instantbird is an instant messaging client with a wide variety of supported networks, including:

But also many others like: Gadu-Gadu, Novell Groupwise, ICQ, IRC, MySpaceIM, Netsoul, QQ, SIMPLE, Yahoo! JAPAN, and even more optionally available on the Instantbird Add-Ons website, such as Omegle and LJ Talk (LiveJournal).

We feel that a user should be able to make their instant messaging client their own: we feel Instantbird can be customized best by giving the user a simple and efficient user interface, and not attempting to include hundreds of bundled options, but allowing the user to customize via the powerful extensibility included in the Mozilla platform. All elements of Instantbird are customizable, from the message theme itself (we’ve built on the great message style format used in Adium) to the Instantbird theme, user interface and protocols. There are already over 250 add-ons available, here are some of our favorites:

As part of our belief in respecting our users, we give them an ad-free experience and respect their privacy by not collecting any information about them (Instantbird contacts our servers only when checking for updates, or in the unfortunate and uncommon event of a crash).

The Instantbird team is a group of volunteers who are passionate about empowering instant messaging users by providing a stable, fun instant messenger. Read more about who we are and our core beliefs and values.

While Instantbird has received invaluable support from the Mozilla community at large, it hasn’t been funded in any way by the Mozilla Foundation. The company-quality infrastructure deployed to build and support Instantbird has been funded by the initial creators who strongly believe in the importance of this project. The increasingly fast growth of Instantbird’s user base leads us to believe the project could find some user-respecting revenue streams from which the project could become economically sustainable and empower the non-profit created for it to start hiring key contributors, following a model similar to what Mozilla has been doing with Firefox.

We’d like to thank all of our contributors and translators who have helped build Instantbird. In addition, we’d also like to thank our invaluable beta and nightly testers who provide timely bug reports and help track down regressions!

Thanks for taking the time to check out Instantbird, if you like it please share it with your friends; if you’re sharing it with your non-English-speaking friends, the website is now localized too!

If you have questions feel free to contact us.

If you are writing about Instantbird and need a logo or are out of time to produce screenshots, we have image resources for you. If this is more convenient to you, this announcement is also available in a press release format.

I’m excited to announce the release of Instantbird 0.3 beta, the first localized preview of what we have been working on for months, available in 10 locales (Czech, German, English, Spanish, French, Dutch, Polish, Russian, Slovak and Ukrainian)!

As Instantbird 0.3 is almost finished and already localized, thanks to the great work of our localizers who were eager to share Instantbird with people speaking their language, this beta release is a great opportunity to give Instantbird a try, play with it, and report bugs!

We look forward to receiving your feedback to help us make the final Instantbird 0.3 release (planned for this month!) a piece of software you will want to share with all your friends!