This is a question people keep asking us. With some variations (“Why should I switch from Adium?”), or sometimes without the question mark (“There’s nothing more than Pidgin”).

We are not competing…

I think people ask us this question because they perceive us as competing with Pidgin/Adium/[insert the name of your favorite open source IM client]. But there’s no good answer to that question, because we are not competing, here is why:

… but we offer an alternative

I can easily understand why people think we compete though, as we do provide an alternative. I assume people who ask the previously mentioned question actually wanted the answer to another question: How is Instantbird different from Pidgin? Now, this is a question we can answer!

I will actually provide several different answers: the first will satisfy technically oriented people, the others should be understandable by everybody. Most of my points compares Instantbird to Pidgin, but are still applicable when comparing Instantbird to other IM clients.

The Mozilla platform has advantages compared to GTK+:

Developing on top of Mozilla also has some (perceived) downsides:

We make Instantbird for you!

Some developers make their programs the best for themselves and share it with you, for free. These programs are the result of people’s hard work which they offer you as a gift, and so these people deserve respect for that! Unfortunately, it is not unusual that if somehow the product doesn’t work out for you, it’s your problem, not theirs, and you are free: to fix it, to report the issue and hope someone will fix it, or to look for a greener pasture. Your comments are valued if they help developers make their program better for everybody, for example if it helps fixing bugs that lots of people suffer from. Your opinions and wishes may not be taken into account, however, unless you intend to actually start working on them: patches are welcome, not additional work (people are busy already).

We work to make Instantbird the best for you. We look forward to gathering your feedback and acting upon it to make Instantbird even better, for you. We assume that when someone takes the trouble to come and talk with us to complain about something, there’s a valid concern. Even when it’s well hidden behind factually inexact assertions that we can’t agree with. If people cannot express themselves clearly, there’s a reason why they are confused, and if a confusion is common, we should find its cause and fix it.

As this difference may be a bit theoretical, I’m going to give a concrete example in the next point: the way we deal with stability issues.

Let’s see what happens in the unfortunate event of the user being hit by a bug resulting in a crash of the application:

If you are using Pidgin and want to help get the bug fixed, you need to get a backtrace (on Unix systems) or to have installed the debug symbols before the crash so that a crash report could be dumped to the disk (on Windows). Then you need to open a ticket on trac and give all the info you have. As this process may be a bit scary for most end-users, I’m afraid valuable feedback could get lost.

If the same issue happens with Instantbird, first we apologize: 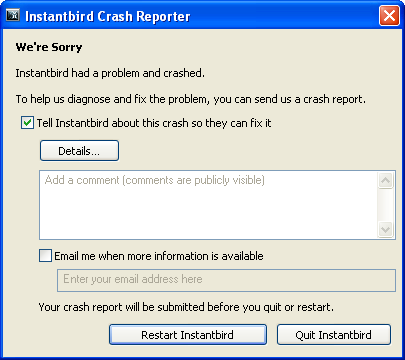 Then all you have to do to send us the technical information about the crash is a single click in this crash reporter dialog. We collect all these crash reports and analyze them to improve the stability of the next version of Instantbird.

In addition to collecting crash reports, another thing we do to maintain a high stability level for Instantbird is that we encourage early adopters to run with nightly builds of Instantbird which are updated almost daily with the very latest version of our source code. Therefore, if something we changed degrades the stability, we receive crash reports way before the defective change ends up in a release you may use.

If some change feels a bit risky to us, we push it to our testers at least a week before releasing, or we delay it so that it gets appropriate testing before being included in the next release.

Just as a comparison, Pidgin’s currently in development code is tested only by developers and others people are discouraged from attempting to use it.

Learn more about our stability efforts.

We keep seeing comments of people (who have not actually tried Instantbird) who think we should go improve Pidgin instead of “wasting time” on Instantbird.

In the page of our website where we explain why we create Instantbird, we conclude:

It’s time to bring back innovation!

To do this, we need to be able to change things easily. As Instantbird is still a young project, we can change fast.

Pidgin on the other hand is already a mature project with policies about when it’s acceptable to change APIs or when they are frozen: it’s basically impossible to change an API in Pidgin until a new major version is released (so after the Pidgin 2.0.0 release, the API changes have to wait until Pidgin 3.0.0 comes out to be included: currently Pidgin 2.0.0 was released over four years ago!). This is a good thing to ensure the plugins stay compatible, but it slows down the changes to the application.

This is my last point even though most people would expect to see it first. Instantbird and Pidgin have different feature sets.

On one hand, Pidgin has some features that Instantbird doesn’t have. Some that we will have in the future. Some that we don’t want to have. I’m not going to give a full list here because I don’t actually have a list of all Pidgin features to compare and check what we have and what we don’t have. We are neither trying to copy Pidgin nor to directly compete against it, so such a list would be irrelevant anyway.

On the other hand, Instantbird has some features that Pidgin doesn’t have (message themes, automatic updates, inline search, …) and even some unique features (for two examples, see my blog posts introducing Time Bubbles and Magic copy).

So, should you switch to Instantbird? If I were you, I would. But I’m not you. Deciding which IM client you use is your choice, based on your taste, your needs, your feelings. It’s your decision, really!

If you love Instantbird, then, obviously you should use it.

If you are in the middle and like Instantbird but for some reason can’t use it because something you really need is missing or doesn’t work, please tell us about it, we are eager to receive your feedback! And maybe there’s already an add-on to customize Instantbird to do what you wanted that we can point you to.

In any case, we are not going to try to force you to switch from Pidgin or whatever IM client you may be using right now to Instantbird. We respect your freedom, we respect your choices, we love you!