The surprise and enthusiasm of a few people about the “magic copy” feature I mentioned briefly at the end of my previous post introducing time bubbles reminded me that we forgot to introduce this feature when it landed for Instantbird 0.2 as part of our implementation of the Adium message theme system.

We decided to use this theme system because it seemed nice overall and was already used by a few other clients as well. However there was something we really didn’t like: using a customized message theme could make copied data from the conversation really hard to read, to the point that it would be unsuitable for sending a quote via email.

As this may not be very clear yet, let me give an example: 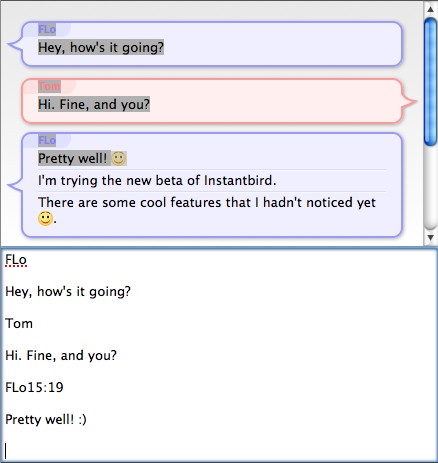 This is the text we get when copying the selection to the clipboard and pasting it. This is without our “magic copy” feature of course.

I should also note that the Bubbles theme used for this screenshot is not the worst in this regards. I’ve seen in the description of some themes (not designed for Instantbird) that they were “clipboard friendly”, which indicates the theme author took this problem into account and probably had to make some trade-offs between the visual appearance and the usability of copied conversations.

As we were not satisfied with this situation (which either makes copying from the conversation poorly usable or restricts theme authors’ creativity), we developed a different system that instead of serializing the selected HTML attempts to detect which messages are selected, and to “prettyprint” them based on what Instantbird knows about the message, rather than what is visible and selected.

This is the result: 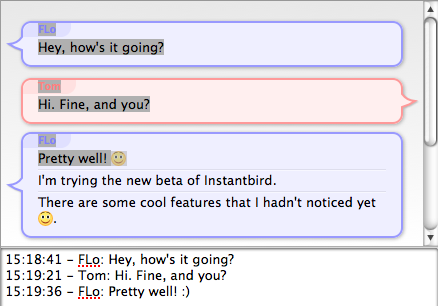 If only a part of a single message was selected, the username and timestamp won’t be added to the copied strings, it will behave like a normal text copy:

As we detect which messages are selected and even know if each message was fully selected or only in part, we can nicely add an ellipsis when a message was cut:

This even works when using multiple-selections (press Ctrl on Windows/Linux, and Command on Mac to do this): 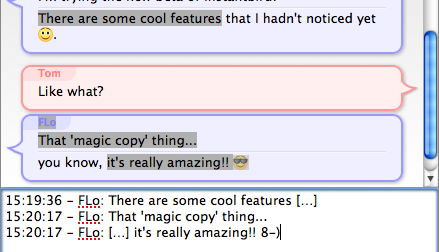 A few technical details: the template used to serialize copied messages is both localizable and customizable from about:config, it’s also possible to completely turn off this feature in case it ever causes some trouble (look for the messenger.conversations.selections.* family of preferences in about:config).

This feature has been turned on by default in Instantbird for over a year and nobody complained about it. Actually, it’s one of the features that is barely noticed because it just works, but it is something that is really missed if using another IM client after using Instantbird for a while.