Instantbird 1.0 has been very quickly downloaded over ten thousand of times. In fact, it happened so fast (especially immediately after we have been featured on lifehacker) that our server couldn’t handle the load.

We have very quickly been able to mirror our main website on another server, which allowed people to keep discovering and downloading Instantbird 1.0, but we had to close the add-ons website for a while as the load it couldn’t handle was also putting down other services that we really needed to keep online, especially our bug database.

We have tried to re-open the add-ons website at a quieter time, but the server was unresponsive again within half an hour. This morning we tried to improve the website’s performance by adding some caching mechanism and reopened again (at a time when most Americans are asleep) for a try. Again it fall down.

Some people very kindly offered help and proposed to host the website on their server, but it’s difficult to trust someone we barely know to host a website that requires our SSL certificate.

As the add-ons website had been closed for almost 2 days already (sorry for the inconvenience!) and extensibility is a key differentiator of Instantbird compared to other similar IM clients, we decided that this situation couldn’t last any longer and we solved the problem by throwing money at it: we ordered a beefier server (Quad Core CPU, 16GB of RAM) and migrated the add-ons website to it as quickly as we could. The website reopened this afternoon, and our testing confirmed that the new server can easily handle the load, even with more visitors than we had when the previous server stopped responding. It’s ready for a lot more people coming! Don’t hesitate to tell your friends to try Instantbird

We have received a massive amount of feedback since the release. Most was positive or extremely positive. We received lots of encouragements. We even received some love letters!

Some of the feedback showed there was some confusion, for example about how we are different from Pidgin (which we will be the subject of another post to clarify things). We also received constructive criticism, good bug reports. The most common request is an easy way to retweet or to reply to a tweet. We will work on that soon

. Tab completion of nick names is also commonly requested, but even though it’s clear we need to have this by default in the future, we can usually satisfy the reporter by pointing to the great (restartless!) Tab Complete add-on.

Users of Instantbird 0.2 will be offered an update shortly with an update prompt looking like this: 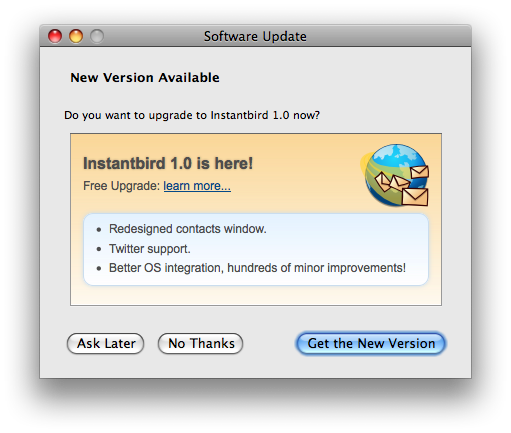 Users of our 0.3pre nightly builds will be offered an update to a nightly build numbered 1.1a1pre in the next few days.

All in all, it’s been a great release and the last few days have been exciting (even though they were also exhausting). We look forward to continue hearing your feedback (and to actually act upon it!). Don’t hesitate to share Instantbird with your friends. Our servers are ready!

We used to handle most support requests received from the contact AT instantbird DOT org email address on a mailing list which was private. This was inefficient as we replied to the same questions over and over and people couldn’t benefit from old replies. New posts to the mailing list will now be publicly readable so that anybody in the community can help users with support requests (see our guidelines describing how we have answered emails up to now), answer questions, or just read the feedback we receive.

Anybody can subscribe to the Google group used: http://groups.google.com/group/instantbird-contact

We have also created another mailing list for all bug changes, so that people interested in knowing what’s changed in our bugzilla can get the information without requesting us to add them as globalwatchers on bugzilla. See http://groups.google.com/group/instantbird-bugs

Note: if you don’t have or don’t want to use a Google account, you can subscribe by email using the [Groupname]+subscribe@googlegroups.com address.

Many of you asked us if we could put online a blog with updates about the development of Instantbird. So here it is!